California is no stranger to drought. The state has suffered five major droughts in the last century, and the U.S. Drought Monitor shows 47% of California currently is classified as being in some form of drought. When California Gov. Jerry Brown lifted the drought emergency declaration in 2017 due to a large amount of rain and snow during the winter, conservation levels among residents fell. In the southern coastal area of the state, residents used 3.8% more water in January 2018 than in the same month five years prior, according to the State Water Resources Control Board.

Although most reservoirs statewide are at normal levels, rainfall totals are about a quarter of the average in Southern California. Progress has been made with conservation habits in and around California, but there is still work to be done.

Conservation With a Twist

Apple Valley is located in the High Desert region of California, approximately 60 miles northeast of Los Angeles. Liberty Utilities Apple Valley provides water service to approximately 20,000 customers in the community of more than 70,000. Given the local climate, recurring periods of drought and limited water resources available in the High Desert, long-term planning and a collaborative conservation effort with customers are critical to ensure water supplies always will be available. While a majority of Liberty Utilities’ customers have adjusted their water use habits over time in response to community education, there was a small group of residential customers who continued to have high water usage.

To encourage conservation as a way of life in the small community, the water provider launched the Liberty Utilities Apple Valley Extreme Water Makeover to give a high water user in the community a complete water-efficiency makeover inside and outside their home. Liberty Utilities identified the top 20 residential water users in their customer service area and invited them to enter the contest at no cost. The winners, John and Christie Vaughn, were randomly selected in a drawing.

“We initially fixed two leaks, but our bill was still something that I did not budget for. I kept thinking of the opportunities we have to save water, but it gets overwhelming,” Christie said. “With the help and support of Liberty Utilities Apple Valley and the Extreme Water Makeover, I know we can take control of our water usage.”

This project was developed to inspire the community to rethink its water behaviors and to encourage residents to become ambassadors for conservation and smart water use. Liberty Utilities Apple Valley worked with local and national vendors to secure donations. It partnered with national companies, including Niagara Conservation and Toro Co., as well as local companies Midway Home Solutions, Contemporary Landscaping & Maintenance Inc., and Valley Soil Inc. to survey and outfit the Vaughn’s home to become more water efficient. 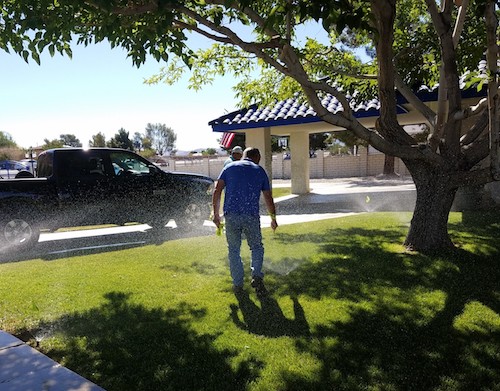 A smart irrigation system was installed for water-efficient lawn care.

The Extreme Water Makeover started with an extensive water analysis to identify water inefficiencies both inside and outside the home. Based on an analysis of their outdoor water use, the Vaughns received a smart irrigation system from Toro Co., which was installed by a local vendor. To further prepare their lawn for the hot summer, it was aerated and fertilized to help nutrients penetrate deeply and soften the soil to promote root growth. The addition of a pool cover completed the outdoor upgrades. These simple enhancements are expected to save hundreds of thousands of gallons of water each year.

Home appliances also can be sneaky water wasters and efficiency updates were needed inside the home. Niagara Conservation donated new high-efficiency 0.8-gal-per-flush WaterSense-labeled toilets, and Midway Home Solutions donated a water-efficient dishwasher and washing machine. These changes are estimated to save approximately 3,500 gal of water each year. The Vaughns expect to see a significant decrease in their water use, which means a financial savings on their monthly bill that they can invest into other home needs.

The Vaughns want their home and yard to be an example.

“I want to be the leaders in water conservation. I want bragging rights to a good-looking, water-efficient lawn and home,” John said. “I’m excited to have our yard and home be the gold standard for our community.”

The utility hoped to ignite this enthusiasm.

“What I really love about the Vaughns is they’re all for it. They’ve been great,” said Norma Armenta, water conservation coordinator for Liberty Utilities Apple Valley. “Small changes in our daily water use behavior can have a lasting impact. Our goal is to use the Vaughns as an example to arm residents with the knowledge and tools necessary to make these changes easy to integrate into their lives.”

Armenta noted that the community’s support also helped make this project a success. She added that the goal of the project was to inspire other residents to rethink their water behaviors and to help raise awareness of how water-efficient appliances and outdoor landscaping can dramatically reduce water use. Relatively small changes can have lasting impacts. Fixing leaks and installing new water-efficient fixtures are the most effective ways to reduce your water footprint.

Although only one household won the grand prize of the Extreme Water Makeover, all customers who entered had the opportunity to receive a professional survey of their indoor and outdoor water use, along with retrofit resources at no cost. The contest’s purpose was to help as many people as possible become water efficient, which seems paramount in this dry, desert region.

Tony Penna is vice president and general manager for Liberty Utilities Apple Valley. Penna can be reached at [email protected] or 760.240.8327.

Do you know a rising star or industry icon? Nominate them for WQP's Young Professionals and Industry Icon programs today.